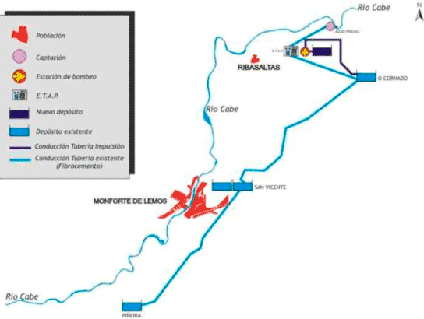 TEDAGUA is to set up a Joint Venture on a 50%-50% basis with the Galician construction company Constructora San José for executing the works included in the contract for "Drafting the Project and execution of the works for extending and improving the drinking water treatment system in Monforte de Lemos", signed last 28 January 2011 with Sociedad Estatal Aguas de las Cuencas del Norte, S.A. (acuaNorte). The activity has an award budget of 5,296,212.88 euro and a total execution term of 26 months.

The need for renovating, extending and improving the drinking water supply system that provides service to Monforte de Lemos means that this project is included among the works declared to be of General Interest for the State. The defects currently existing in the drinking water treatment system of the District of Monforte are summarised as follows: there is no adequate facility for treating drinking water, since the Drinking Water Treatment Plant (DWTP) of Ribasaltas is in a very poor state of conservation, and it is necessary to build a new treatment plant to guarantee the necessary conditions of quality for supplying the population. In addition the DWTP of San Vicente, which has been in a deteriorated condition for several years, is not fit to be put into operation again for use as a complement to the drinking water treatment system. On the other hand, the piping network has faults in the conveyance system and the existing connections between the District regulation tanks. This situation makes it impossible to operate the system correctly, leading to irregularities in the drinking water supply, particularly during peak demand times.

The work to be executed to renovate the current supply system consists of building a new DWTP on the plot next to the existing Drinking Water Treatment Plant (DWTP) of Ribasaltas, with a capacity of 230 l/s (19,872 cubic meters per day), which could be extended to 300 l/s with no problem. The plant has two separate lines, with a pre-filtering system, oxidation with ozone, pH adjustment, physical and chemical treatment, lamellar decanting, two-layer pressure filtering through sand and anthracite and final disinfection with UV radiation and sodium hypochlorite. In environmental terms, the plant has important improvements, since it has a treatment line for sludge generated in the decanters and filters, with dissolved air floatation and dewatering by centrifugation.

A regulation tank of 3,200 cubic meters will be built next to the plant. In addition, a pumping station will be built for this new drinking water facility between Ribasaltas and O Cornado with a capacity of 300 l/s, and an impulsion pipe with a length of 351 meters . As accessory regulation and control works, the connections of the tanks in San Vicente and the tank in Piñeira will be remodelled.