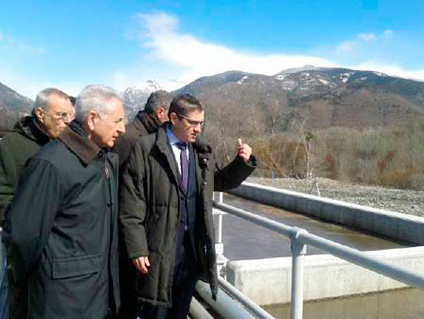 On 13 March, the Government of Aragón officially opened the Biescas Wastewater Treatment Plant (WWTP) as part of Zone P2 (the Alto Gállego district) of the Pyrenees Plan. This facility treats the wastewater from the towns of Biescas and Gavín and that generated by the industries connected to the municipal network. According to the Government of Aragon, this project by Tedagua represents “a milestone for the Pyrenees and for Aragon as a whole”. Work began in May 2011 and in August 2012 a 20-year period of operation began.

The Biescas WWTP is designed to handle a contaminant load for an equivalent population of 12,000, and is capable of treating an average daily flow of 2,400 m3/day. The stages of the wastewater treatment system include pre-treatment with roughing, desilting, and degreasing, done by two compact plants, and secondary biological treatment which is done with activated sludge by extended aeration on four treatment lines in the biological reactor, with two secondary settling tanks. The sludge generated is stored in a thickener for later drying and storage in the sludge silo. The plant will also treat the sludge generated by other nearby WWTPs that do not have their own dehydration systems.

The units that make up the Biescas WWTP were adapted to the existing facilities and to the topographical and geotechnical characteristics of the area. The facilities, with efficient maintenance and operating costs, are able to absorb minor variations that may occur in the established basic parameters and minimize the possibility of odour, vibration, or noise.

The Government of Aragon provides integrated treatment of the wastewater from the towns in the Aragon Pyrenees through the “Pyrenees Plan”. These projects, which have been declared to be of public interest, are contracted through a public-private financing model by the Aragon Water Institute (IAA) through a commission as part of the agreement signed with the Ministry of Agriculture, Food, and the Environment.

The Pyrenees Plan will make northern Aragon the first mountainous region in Europe to treat 100% of its wastewater. The contract for zone P2, the Gállego River basin, was awarded to the Tedagua-Elecnor Joint Venture for 98.2 million euros, with a base fee of 1.3406 euros per cubic metre of treated water. This project, with a construction budget of 31.7 million euros, benefits 58 towns with 56 wastewater treatment plants and their associated collectors. Most of these are small plants; 51 are designed for equivalent populations of less than 400, and only 5 for more than 1,000, for a total equivalent population of 42,440. The largest plants are the Escarrilla-Panticosa WWTP and Biescas-Gavín WWTP.

Tedagua is involved in three concession contracts that form part of the Aragon Drainage and Treatment Plan, with a total investment of 278 million euros and projects in more than 80 towns. The other two correspond to Zone 07A in Zaragoza and Zone 09 in Teruel.