Ollanta Humala, the President of Peru, inaugurates the Taboada WWTP 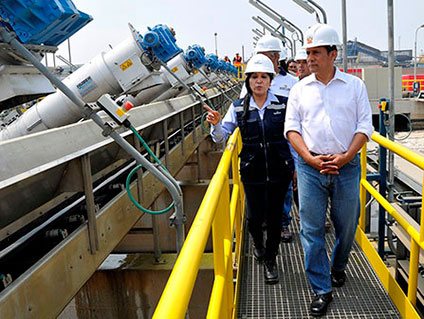 The President of Peru, Ollanta Humala, inaugurated the third and last stage of construction of the Taboada Wastewater Treatment Plant (WWTP), which from now on will treat an average nominal flow rate of 14 m3/s (with peaks of 20.3 m3/s). This flow rate accounts for 75% of Lima’s and Callao’s drainage, involving an equivalent population of 4,300,000 inhabitants. Total investment in the Taboada WWTP reached more than 491 m Nuevos Soles (about € 127 m) during the Project’s three stages.

Before the third stage of the Taboada WWTP began operating, Sedapal (Servicio de Agua Potable y Alcantarillado de Lima) treated 52% of the wastewater generated in Lima and Callao by means of the 22 plants it manages and the first two stages of the Taboada WWTP, which came into operating in 2013.

In August 2009, Sedapal, through the state corporation ProInversion, awarded ACS Servicios Comunicaciones y Energía the concession contract to design, build, operate and service the plant during 25 years. In turn, ACS subcontracted all the project design, construction, commissioning and operation work to its subsidiary Tedagua, a member of the COBRA Group.

The following video in Spanish language, shows the works carried out to date: