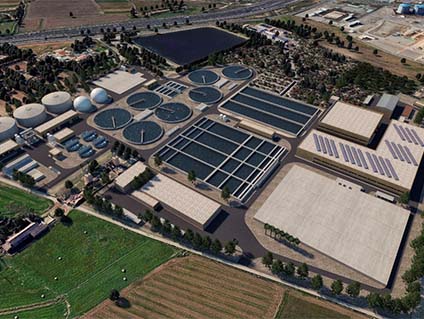 The last few months of 2022 were very successful for Tedagua, as it led the award of several of the most important contracts tendered during the year, placing it at the forefront of the Spanish water and water treatment market for 2023. Thanks to the development of these contracts, together with clients and partners, it is expected to carry out a transformation of several areas to comply with European environmental standards and will focus on disruptive technologies in energy efficiency and digital management of infrastructures.

In the area of wastewater treatment, Tedagua has led the consortium awarded the Palma II Wastewater Treatment Plant (WWTP), located in Palma de Mallorca and put out to tender by ACUAES. The plant will be built in a joint venture with Copasa and Lantania and will include the enlargement and remodelling of the treatment capacity of the current plant, reaching a production capacity of 90,000 m3/day to provide service to one million inhabitants.

The WWTP works will be co-financed by the European Union's Next Generation funds within the framework of the Recovery, Transformation and Resilience Plan, for the development and financing of the works. It will also contemplate the remodelling of the pre-treatment system to reach a capacity of 30,000 m3/hour, which will make it possible to eliminate discharges during rainy periods without pre-treatment. It will also incorporate a specific treatment to eliminate nutrients, a tertiary treatment that will allow the water to be reused for irrigation and tertiary uses, and a sludge treatment that will improve the energy efficiency of the sludge.

At the end of the year, a decision was also taken on the award of the contract to carry out various actions to improve the infrastructure of the municipalities bordering the Entrepeñas and Buendía reservoirs, located in Guadalajara and Cuenca and put out to tender by the Castilla-La Mancha Water Agency, an agency of the Ministry of Agriculture, Water and Rural Development of the Government of Castilla-La Mancha. These hydraulic works will be executed in a joint venture, led by Tedagua together with its partners Sarrión and Gómez Group Metering.

The works will consist of equipping sewerage pipes and small treatment plants, as well as supply pipes, equipped with smart metering systems and improvements to drinking water treatment systems.

According to Operation and Maintenance, Tedagua was also awarded one of the most significant contracts in this sector, that of the thermal drying plant with cogeneration of the ERAR Sur, in Madrid, tendered by Canal de Isabel II.

The contract will consist of the management of the dehydrated sludge produced at various wastewater treatment facilities managed by Canal de Isabel II and which arrives at the ERAR Sur, including treatment, transport and final disposal for use in agricultural applications or transport to the Loeches Thermal Drying Plant.

The operation will be carried out under indirect management to ensure stable and continuous operation of the 290,000 tonnes/year combined capacity. At all times achieving the results in terms of emissions and immissions into the atmosphere and drying and the necessary parameters for the efficient reuse of the dried sludge. It also has an installed electrical power of 23.7MW cogenerated through primary energy and natural gas.

During the development of the service, the aim will be to optimise the performance of the different processes and unitary systems of which the facility will consist, as well as to ensure the maintenance of each and every one of the equipment of which it is composed and to implement improvements that maximise the performance of the processes, making this contract the emblem of cutting-edge circular management that can be exported to other developing countries for the treatment of sludge.

This contract is in addition to the one awarded previously for the operation and maintenance service of various sanitation, treatment and supply facilities in La Rioja (Lot I Rioja Baja - Alhama), and tendered by the Water and Waste Consortium of the Government of La Rioja.

The Operation and Maintenance (O&M) will be carried out for a period of 4 years in a joint venture, led by Tedagua together with its partner Aqlara, and will cover the operation and maintenance service of the wastewater treatment plants, pumping wells, spillways, storm tanks, outfalls, septic tanks and other primary treatments managed by the Consortium.

The plants included in the O&M contract will be the WWTPs of Aguilar, Aldeanueva, Alfaro, Cabretón and Cervera, among others, as well as the Ventas del Baño WWTP.

Finally, at the end of the year, Tedagua was awarded the Operation and Maintenance contract for the lot that includes the dams managed by the company Aguas de las Cuencas De España (ACUAES).

The Operation and Maintenance (O&M) will be carried out for an initial period of 2 years in a joint venture, led by Tedagua together with its partner Elecnor. The work will mainly involve activities related to the supervision of the dams, the management of the communications systems in normal situations and in emergencies, as well as the implementation of centralised software for the management of the dams. In addition, cleaning and surveillance activities will be carried out, as well as the implementation of the maintenance of the facilities.

The facilities covered by the contract are: the Breña, Arenoso, Zapateros, Montoro, Colada, Casares de Arbas dams and the regulating dam on the Regajo stream. The diversion dam and main conduction of the irrigation area of the Adaja river (Zorita de los Molinos dam and reservoirs), as well as the San Salvador reservoir.

With the addition of all these contracts, Tedagua strengthens its position in the market for the construction, operation and maintenance of water infrastructures, which allow the purification and supply of drinking water through the different infrastructures in an environmentally sustainable and efficient manner.