Tedagua continues to help curb the water emergency in the Canary Islands, with a desalination plant in El Hierro 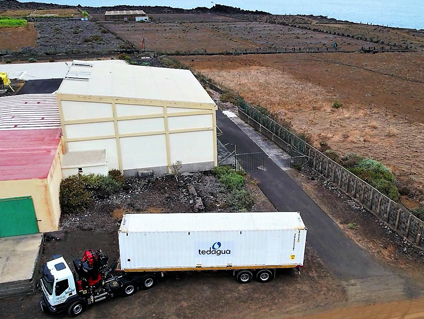 After more than two months in operation, the containerized desalination plant that Tedagua installed on the island of El Hierro continues to help curb the water emergency declared on the island last June.

The absence of rain caused a notable drop in the levels of water available on the island for the irrigation of plants and crops, which put at risk the main economic engine of the island. This fact prompted the Insular Water Council of El Hierro to make a request to solve this problem.

TEDAGUA made a desalination plant in container format with 1,200 m3/day of product water available to the island. In record time, the EDAM was placed in Frontera (El Hierro) on June 13, starting with the adjustments according to the existing intake and the start-up tests. On July 14, desalinated water for irrigation began to be produced.

The plant uses reverse osmosis technology to produce product water, transforming salt water from the sea. Its construction in container format facilitates its transport and installation, in addition to having a reduced impact on the environment. To date, the installation is generating the flows requested by the client, with the forecast to be in operation until November of this year.

This milestone comes just one year after the construction by Tedagua of two emergency desalination plants of 2,600 m3/day on the island of La Palma, also in record time, after the eruption of the Cumbre Vieja volcano. Thanks to this, it was possible to save the production of multiple banana crops from the effects of said natural disaster and joins other recently built modular plants, such as the six 1,000 m3/day plants installed in Fuerteventura for the supply of drinking water.

These achievements are an example of Tedagua's commitment to the population and the Administrations of the Canary Islands, putting at their disposal viable technical solutions and rapid response to the challenges of water scarcity.