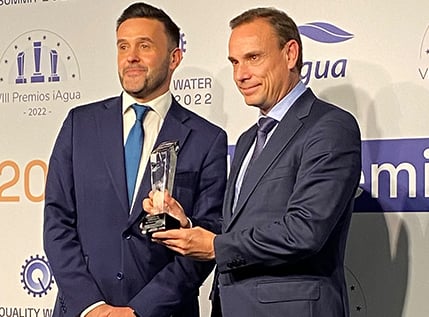 Tedagua was present at the Quality Water Summit, held between April 25 and 29 and organized by iAgua, where last Friday he received the award as best ’Water Treatment Company of the Year' at the VIII iAgua Awards. These awards are the most prestigious in the water sector in Spain and Latin America that since 2014, have been recognizing the most outstanding entities and professionals in the field of water resources management.

Luis Miguel Arauzo, commercial director of the company, received the award as a reward for the good work done during the last years, during which the company has started the operation of the PROVISUR desalination plant, in December 2020 the construction of the East Bay water treatment plant was awarded and in November 2021 the operation and maintenance of the Magtaa desalination plant, the largest in the world. Africa. In addition, during the eruption of the Cumbre Vieja volcano on the island of La Palma, Tedagua installed and put into operation two portable desalination machines in record time, which made it possible to restore the supply of irrigation water for the banana plantations in the area. In the words of Luis Miguel Arauzo: “The 2,000 people who work here are proud of the work we do, and of receiving this award.”

On Wednesday 27th, dedicated to the circular economy, Tedagua participated with a presentation led by Raúl Fernández – Director of Engineering – in which he reaffirmed the firm commitment of the company in its commitment to reuse and the circular economy as the backbone of the different projects it has underway.

During his speech, Raul said: “In Tedagua, we believe that reuse is a value without which it is no longer possible to understand the water sector. We try not only to reuse water, but to focus and direct processes to create value-added by-products.”

The first example presented was the PROVISUR project in Peru, with a production capacity of 34,560 m3/day and focused on the reuse of purified urban water for irrigation and paving where 100% of the effluent has irrigation quality.

The use of purified urban water for industry carried out in projects such as Altona and West Werribee (Australia) or the Balten System in Spain, focused on the reuse of urban and brackish water for agricultural irrigation, also centered part of Raúl Fernández’s speech, highlighting that “we try not only to reuse water, but also to focus on directing processes to create value-added by-products.”

Treatment of congenital water from oil fields associated with the production of hydrocarbons produced by the Pacific Rubiales project (Colombia). The plant has a pre-treatment phase with several filtration systems prior to the application of a reverse osmosis process that recovers up to 90% of water, representing an absolute novelty in the sector and in the country in the field of industrial water reuse.

All these projects exemplify Tedagua’s firm commitment to the circular economy and the reuse of water, in a context of a tendency towards scarce resources and with energy use as one of the bases of the work to be carried out now and in the future.