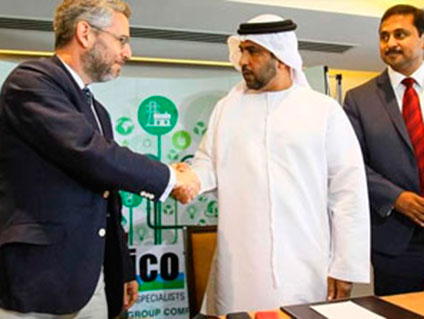 Grupo Cobra, the main ACS subsidiary in the industrial infrastructure area, along with Utico Middle East, the main supplier of public services to the Gulf Cooperation Council, set up in August last year the Al Hamra Water Company, launching the world’s largest privately financed desalination company. Grupo Cobra has a stake of 40% in the Al Hamra Water Company, while Utico Middle East holds the remaining 60% shareholding. With planned investment of 719 million United Arab Emirate dirham (around 195.7 million dollars), this will be one of the largest direct foreign investments in the UAE, and certainly the biggest in an infrastructure project of this type.

The facility will be built in the area of Al Hamra Jazeerah, in the emirate of Ras Al Khaimah. The Al Hamra Water Company has entered into an EPC (Engineering, Procurement & Construction) contract with Tedagua for this seawater desalination plant. The facility will produce 100,000 m3/day of drinking water to meet the needs of Ras Al Khaimah and its surrounding areas. It will be a high-tech plant with the lowest energy consumption in the region, which will enable a reduction in annual CO2 emissions of at least 33,280 tonnes. These factors will help reduce the plant’s impact on climate change, in addition to supplying high quality water to all consumers.

The plant is scheduled to begin the supply of potable water in June 2017, and is expected to be fully operational by 2018. Most of the water produced will be supplied to the Federal Electricity and Water Authority (FEWA), which is responsible for the supply of water and electricity to Ras Al Khaimah, Ajman, Umm Al Quwain, Fujairah and other coastal cities.

Due to the desert conditions, water from desalination plants accounts for over 80% of all water consumed in the UAE, the second largest producer of desalinated water in the MENA region, after Saudi Arabia. The investment of Grupo Cobra and Tedagua, Cobra’s subsidiary specialised in the engineering, construction and operation of water treatment plants, is a clear vote of confidence in the growth potential of the UAE, and these new facilities are part of the group’s strategy to expand its presence in the Middle East.