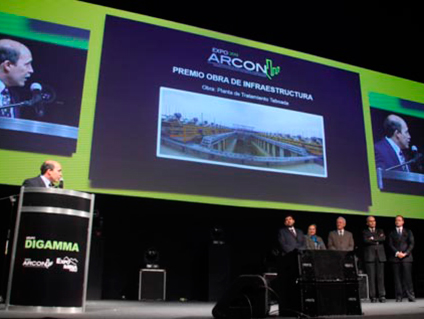 The Taboada waste water treatment plant (WWTP) received the ARCON 2013 award for infrastructure as part of the international conference of suppliers for construction, infrastructure development, architecture, and engineering held from 3 to 5 July at the Jockey expo centre in Lima, Peru.

The ceremony was attended by. D. Jorge Casella, TEDAGUA’s Country Manager in Peru, who, after receiving the award, thanked the organizational committee of the EXPO and highlighted the importance of this infrastructure project in improving the quality of life of the population of Lima, processing 56% of the city’s wastewater and improving the care and respect for the marine environment.

The Taboada WWTP is a flagship project done through a system of public - private association with an investment of more than 150 million dollars. The concession for the construction, operation, and maintenance was awarded to TEDAGUA by the Peruvian government for a period of 25 years.

EXPO ARCON 2013 brought together foreign delegations from Spain, Chile, Colombia, England, Brazil, Germany, and China, which was represented by a delegation of 43 companies.

An estimated 30,000 people connected to the construction sector attended the 3 days of the event.