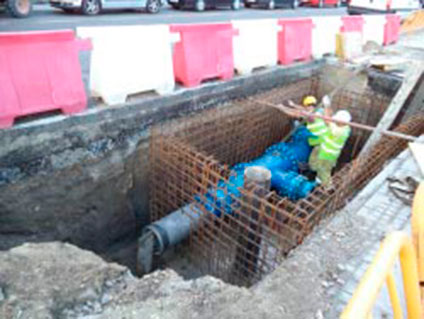 The water supply works on the right bank of the Ría de Pontevedra, affecting the municipalities of Poio, Pontevedra and Sanxenxo, started last April and are progressing at the expected rate. These works were awarded by the state corporation Acuaes (Aguas de las Cuencas de España, S.A.) to the temporary consortium comprised of Tedagua and Vías y Construcciones, both members of the ACS Group.

Within the municipal district of Poio, the conduit that supplies the towns of Poio and Sanxenxo, and which runs under highway PO-308, is being refurbished. 6km of piping have been upgraded to date, mostly by applying trenchless technologies.

In Pontevedra, work is being done to improve the water catchment at Monteporreiro, and the construction of a new headrace running from the Pontillón reservoir to the city’s drinking water treatment plant (DWTP) has already began. 1,000 m of piping have been laid already. Extension work on the DWTP and the Lérez and Mourente tanks will start in November.

Finally, in Sanxenxo, work on the Dorrón and Bueza tanks and on the piping linking the Padriñán and Buezas reservoirs has commenced. 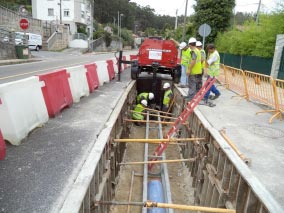 Completion of the water supply works in Pontevedra and its Ria will lead to an improvement in the quantity and quality of the water supplied to the inhabitants of the affected towns and entail significant energy savings while preventing the risk of shortages due to peak demand during the summer owing to the increase in population in resort towns.