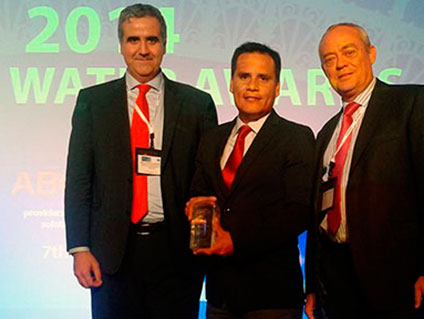 Taboada wastewater treatment plant (WWTP), in Lima, constructed by Tedagua and commissioned during 2013, has been recognised as the best in the year at the annual Global Water Intelligence (GWI) Awards event held on 7 April in Paris.  These awards are presented every year by the magazine Global Water Intelligence (GWI), the most prestigious magazine worldwide in the water sector. According to the terms and conditions, the award is given to “... the wastewater treatment plant commissioned during 2013 that shows the greatest innovation in terms of efficiency, optimisation and environmental sustainability”.

Taboada WWTP, the largest built to date in South America, competed with three other finalists in its category: the New Cairo WWTP in Egypt, the Tubli WWTP in Bahrain, and the Warsaw wastewater treatment system in Poland.

SEDAPAL (Servicio de Agua Potable y Alcantarillado de Lima), a water and sewerage company, awarded the BOT contract to ACS Servicios Comunicaciones y Energía, the parent company of the industrial division of the ACS Group, via the state-owned company Proinversión, in August 2009 to design, build, operate and maintain the plant for 25 years. ACS then subcontracted all the design, construction, commissioning and operation works to its subsidiary Tedagua, which belongs to the Cobra Group.

With an average flow rate of 14 m3/s and a maximum of 20.3 m3/s, it serves a population equivalent of over 4.3 million, which represents 56% of the population of Lima and Callao and 72% of the wastewater these cities produce. Before the plant started operating, the capital city of Lima only treated 16% of its wastewater using some plants and oxidation ponds. The commissioning of the new WWTP solves the health problem caused by discharging untreated wastewater into the sea and the River Rímac, and represents the start of the decontamination of Peruvian waters.

The treatment process at Taboada WWTP is equipped with the largest screening filters in the world—22 filters with a diameter of 3,000 mm—, as well as rough grates, 6-mm screening, grit and grease removal and 1-mm fine screening. The system ensures the removal of all sedimented solids, since it only sends colloidal and water-soluble substances to the sea, which the marine environment can easily assimilate.

The last phase in the process comprises discharging the treated wastewater into the sea. This infrastructure is highly representative of the plant given that it is the largest underwater outfall worldwide made of high-density polyethylene (HDPE). The pipe comprises an onshore section of 400 metres and an underwater section of 3,500 m, amounting to a total of 3,900 m, of which 3,240 m are 3,000 mm in diameter, 330 m are 2,400 mm in diameter and 330 m are 1,800 mm in diameter. The diameter decreases in the diffuser section, which is 1,000 m long and equipped with 500 diffusers.

In Peru, one of the countries in South America experiencing the highest economic growth, Tedagua has taken advantage of an excellent opportunity to demonstrate to a previously sceptical Peruvian public sector exactly what private sector initiative is capable of delivering.