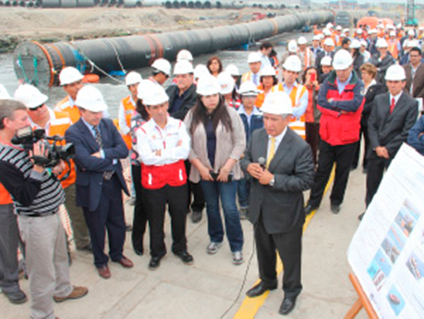 The first 100-metre long piping section was successfully laid in the presence of the Minister of Housing, Construction, and Drainage, Mr René Cornejo Díaz, and the general manager of Sedapal, Rossina Manche. The outfall will carry the waste water from 27 districts of Lima and Callao to deep water after being treated in the Taboada WWTP.

The underwater pipe that carries the treated water out to sea is unique in South America in terms of its dimensions and advanced technology. It is a 3,900 metre-long and 3.0 metre-diameter conduit made of high-density polyethylene. The first 400 metres have already been laid on land and the remaining 3,500 metres will be installed underwater. A detailed study of the tides and marine currents in the discharge zone guarantees that the waste water will be completed diluted and will have no impact at all on the marine environment.

The underwater pipeline will be completely installed by the end of the year and the treatment plant will be put into operation immediately, with a treatment capacity of 7 m3/s in phase one. Phase two, which will have a treatment flow of 14 m3/s with peaks of 20 m3/s, will be operative in July 2013. The Taboada treatment plant represents the start of the process to combat pollution in the Peruvian marine environment.

Sedapal (Servicio de Agua Potable y Alcantarillado de Lima) awarded ACS Servicios Comunicaciones y Energy S.A. the 25-year concession contract for the Taboada waste water treatment plant in August 2009. In turn, ACS subcontracted all works for project development, construction, and operation to its subsidiary TEDAGUA, a member of the Cobra Group. A total of 416 million Nuevos Soles, or approximately 124 million euros at the current exchange rate, will be invested in the project.