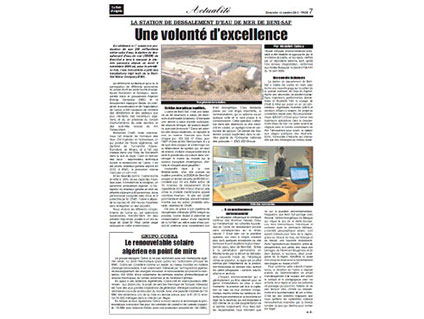 On 1 October the seawater desalination plant (SDEM) at Beni-Saf celebrated the production of its 200 millionth cubic metre of water, so continuing to follow the path taken since Monday 9 November 2009 when, for the first time, industrial water supplies flowed through the high tech installations of the Beni-Saf Water Company-BWC.

The symbolic ceremony, attended by various project partners, including the energy heavyweights Sonatrach and Sonelgaz, represented in the Algerian Energy Company (AEC) group and the Spanish group Geida and responsible for construction and operation of the plant, was an opportunity to provide attestations and give gifts to the most deserving Algerian workers in the presence of the plant's board of directors and the local authorities of Aïn Témouchent.

Mohamed Chaffi, our cicerone, then gave us a tour of the premises. This hydraulic engineer, a product of the Algerian education system, has a degree from Abane-Ramdane University at Béjaïa, and did his training in a subsidiary of Sonatrach in the south of the country. He knows the place well: he was technical manager during the construction of the plant and then promoted to deputy managing director in 2012. In BWC, an internal promotion is not meaningless.

The results are clear: the plant operates at 100% of its installed capacity and, as must be highlighted, its 80-strong workforce is completely Algerian except for the managing director. Mr Chaffi pointed out another highlight of its performance: the plant has operated for over 24,000 hours without recording a single accident.

We visited the various sections of the plant which, through a series of operations, transform into drinking water the raw water drawn one kilometre off Chatt El Hillal, a small beach that is quiet in this off-season period.

The Beni Saf plant contains 48 sand filter tanks and 28 anthracite filter tanks (coal). It uses a chemical process based on sulphuric acid, iron chloride, sodium bisulphite and who knows what else? This modern day still draws water from the sea, and reverse osmosis provides 200,000m3 per day for the Oran and Aïn Témouchent water adduction and distribution systems. There is good reason to reflect and wonder about the careless actions of those who, at the end of the chain, each weekend spend time washing their car with lots of water without any wondering about the incredible amount of intelligence, hard work and money wasted!

Located by the Mediterranean Sea, from which it pumps its raw material, the Beni-Saf SDEM occupies a plot of almost 66,000m2, granted for a period 25 years. It is built around 10 desalination modules with a capacity of 20,000 m3/day each, and uses the membrane procedure called “reverse osmosis”. Whilst it uses rather high amounts of energy, it is cheaper than the other existing procedures, explains Mr Chaffi.

Additionally, and due to its energy recovery system (ERI) integrated into the process, the plant manages to limit its consumption to an average of 4.15 KWh per cubic metre of water produced, and thus significantly improves its energy efficiency. The desalinated water goes through an important process, remineralisation, which in a way brings it back to life and makes it suitable for consumption. This operation takes place in tanks where it is enriched with calcite, an aggregate rich in calcium carbonate. This mineral is produced in the giant quarry belonging to the national granulates company, ENG in El Khroub.

Does the continued mechanical and chemical trituration of the enormous masses of water which pass through the desalination plant’s gleaming pipes have no impact on the natural environment? This is of course the first question which comes to mind, especially as just a short distance from the site is the largest fishing port in the country, Beni-Saf. Due to the ongoing penetration into the Mediterranean, through the Strait of Gibraltar, of plankton-rich cold currents from the Atlantic, the region is in fact known for its high production of oily fish, especially small pelagic species: sardine, horse mackerel, round sardinella and anchovy.

The environmental impact of this kind of facility has generally been observed at two points in the process: the first is connected to the collection of seawater (e.g. the collision of marine organisms against the collection drums) and the second to the discharge of the bittern, dispersed 500 metres from the coast (in particular, increased salinity). For Beni Saf, the managers inform us that the advance environmental impact study was conducted and approved by the supervisory ministry, and that, after three years of operation, the waste as verified by an external laboratory is compliant with the limits set by decree no. 06-141, dated 19 April 2006.

The Beni-Saf desalination plant looks set to write a new page in the history of the great water adventure in Algeria. After decades of water shortages, engineers, managers, specialists and students are travelling to Chatt E Hillal, which is starting to look like a mini-campus: engineers, students (undergraduate, postgraduate and doctorate levels) and researchers work together on site. There is a draft agreement with the Polytechnic College (ENSET) in Oran to train engineers specialising in seawater desalination. Another agreement is being negotiated with the university complex at Aïn Témouchent to open the plant to work placements for students. Finally, the University of Alicante in Spain is interested in doctoral exchanges on environmental subjects. We should remember that Beni Saf shares with Almeria, in southern Spain, the Medgaz energy line which supplies the south of old Europe. The economic, historical and cultural links with the Iberian Peninsula, helped by geographical proximity, are some of the ways that, thanks to the miracle of water, energy and hard work, the region could become a new Andalusia. While agriculture recovers, as a result of desalination, with some water from the Hammam Boughrara and Beni Bahdel dams, another important asset for the region, tourism, is also enjoying success as the beaches are connected to the water adduction and distribution system.

Confirming this search for excellence, the plant management has submitted a plan to the authorities to create a garden area combining play and learning for the children of the region and for summer visitors, who, rather than just sunbathing, will be able to learn about desalination and protection of this precious blue gold. It is with these magical thoughts that we leave the splendid Témouchentois hills, lit up by the fading golden light of day, to return to Algiers.

Algerian Solar Renewables in the Spotlight

The Spanish group Cobra (not to be confused with its Algerian homonym involved in electronics for the general public) is BWC’s main shareholder. Cobra is considered to be a global leader in renewable energy. It is particularly interested in the Algerian programme for the development of new and renewable energies, which foresees that by 2020, around sixty photovoltaic and thermal solar plants, wind farms and hybrid centres will have been built.

In support of its Algerian ambitions, Cobra provides several references: in the United States, the thermal power station project in Tonopah (Nevada) is one of the largest solar energy generation plants under construction in the world. With an installed capacity of 110 MW, when it is commissioned, which is planned for late 2013, it will supply approximately 75,000 households in the city of Las Vegas.

In South Africa, Cobra has also implemented fixed structure photovoltaic technology for the Lesedi and Letsatsi plants (capacity: 75 MW for each, with annual production of 160 GWh).

•   This article is a translation of an article published by Abdellah Dahou in the newspaper Le Soir d’Algérie, on 13 October 2013.