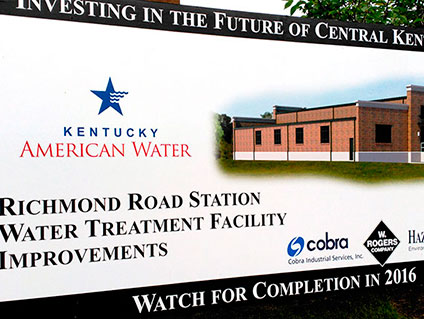 Cobra Industrial Services Inc., the US subsidiary of the Cobra Group has secured the first contract in the USA for the Cobra Medio Ambiente division. The $14,265,285.00 USD contract was awarded by Kentucky American Water to construct their new Richmond Road Station Filter Building in Lexington, Kentucky USA. Tedagua, as the leading company in the Cobra Medio Ambiente division, will execute the work, along with joint venture partner W. Rogers Company.

The new Filter Building will have a capacity of 25 MGD (94,625 m3/d) and will replace the old filter facility that was originally constructed in 1924, with extensions in 1937, 1938 and 1953. The work will include the construction of a new Filter Building equipped with conventional multi-layer filters with sand and granular activated carbon as the filter media. The Filter Building will feature an air scour system and a backwash pump station. New disinfection and chemical dosing lines will also be installed. The civil engineering works, electrical distribution and standby power installations, associated instrumentation and control systems, and HVAC systems will be of the standard type for plants of this nature. All the work will be completed without interruption to the service and within the boundaries of the existing premises.

This is not Tedagua’s first contract in the United States of America. The company recently concluded work on the demineralization and service water plant at the Crescent Dunes Energy solar thermal power station in Tonopah (Nevada), one of the world’s largest solar thermal power plants with a central receiving tower.